Microsoft Train Simulator is turning 15 years old, and it’s still going strong. Not bad for software that’s officially listed by Microsoft as “unsupported” by Windows Vista and later versions. But it’s still possible to run it in Windows 10 on its own, and Open Rails will keep MSTS content alive for the foreseeable future.

How far have we come? Well, just for fun, here are a couple of screenshots. (Click the images to see the full versions.)

The first is the original MSTS Marias Pass route, from the cab of the default Dash 9. 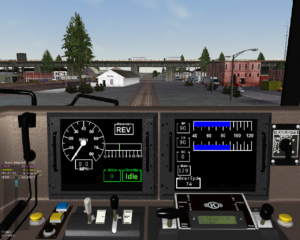 Next is the same spot on Marias Pass 5 (A more modern re-worked version of the Marias Pass route) from a modern cabview of the Dash 9, and taken in Open Rails.