The older original design Mac Mini has a known flaw where the connector for the power switch may separate from the motherboard, rendering the computer useless. The standard (and expensive — around $300 US!) is to replace the motherboard. Not a good investment on an old computer. But here’s how to perform a simple fix to get the Mini back in action, more appropriate for an old machine that’s probably not going to be kept around forever.

I’ve used a Mac Mini that runs Windows with Apple’s “BootCamp” dual-boot solution for years. In fact, this particular “Late 2009” edition Mini has run Windows XP, Windows 7, and Windows 10. It runs MSTS and Open Rails, even Flight Simulator 9 and Flight Simulator X. While it’s not the fastest thing on the planet, it’s been surprisingly good. MSTS can run with all settings maxed-out, and Open Rails and the flight simulators give decent performance at moderate settings.

Time and heat degraded the thermal paste used on the CPU and GPU heatsinks, however, so the need arose to open it up, remove the heatsinks, and replace the dried-out thermal paste with new. Opening a Mini of this generation requires prying the case halves apart with a thin putty knife, which is annoying but less drastic than it sounds. I’ve opened it before to upgrade the hard drive, so that’s no big deal. However, getting to the heatsinks and removing them requires taking the motherboard out of the lower case half, which is further than I’ve normally had to go in servicing this tiny computer.

(To learn how to open and get to the motherboard on this particular Mini, visit iFixit’s page.)

The motherboard is below all the other components which are cleverly stacked together on top of it. As you remove everything, the last step is to unplug the wires for the front LED power indicator and the power button on the rear of the case. Unfortunately, Apple chose to use tiny plastic surface-mounted plug connectors that deteriorate with age. When it came time to re-connect them, the LED plug cracked, but could be put back together. But the power button’s identical plug simply disintegrated and the the surface-mount solder points came apart at the same time. Catastrophic structural failure! I was left holding what appeared to have become a paperweight.

So, all we have to do is re-connect the power switch wires to the motherboard’s solder pads. Notice in the picture of the repair that one of the solder pads has the callout “V” next to it. That’s the powered wire side. The other next to it is ground. The wires aren’t marked — they normally rely on the keyed plug design to maintain correct polarity. With the plug gone, it’s not as hard to tell as you think. The wires are twisted together and tucked into the case in such a way that they will naturally lie in their correct position. Keep them aligned correctly, and mark the “V” wire with tape as a reminder. Then un-twist them to separate them so they’re easier to work with.

Now, get out a magnifying lens if you have one, and your thinnest soldering iron tip. Heat the ends of the power button wires and spread a drop of solder to tin each one; they’re gold-plated and very easy to tin. While those cool a bit, heat the two solder pads on the motherboard. They’re marked “J14801” and “V”, directly beside each other, closest to the back of the board. Tin each pad with a small drop of solder. Don’t worry, like all circuit boards, the coating resists solder, so it will bead right up on only the pads when you heat them correctly. Last, bring the tips of each tinned wire, starting with the “V” wire and touch them to the tinned solder points at about a 45-degree angle, then heat them. As soon as the solder flows together, lift the iron away and hold the wire in place for a second as the solder solidifies. Let the first connection cool for a moment, then do the second wire closer to the edge of the board the same way. Make sure the solder doesn’t flow between the two wires — it’s not likely to, but be careful not to create a solder bridge between them. 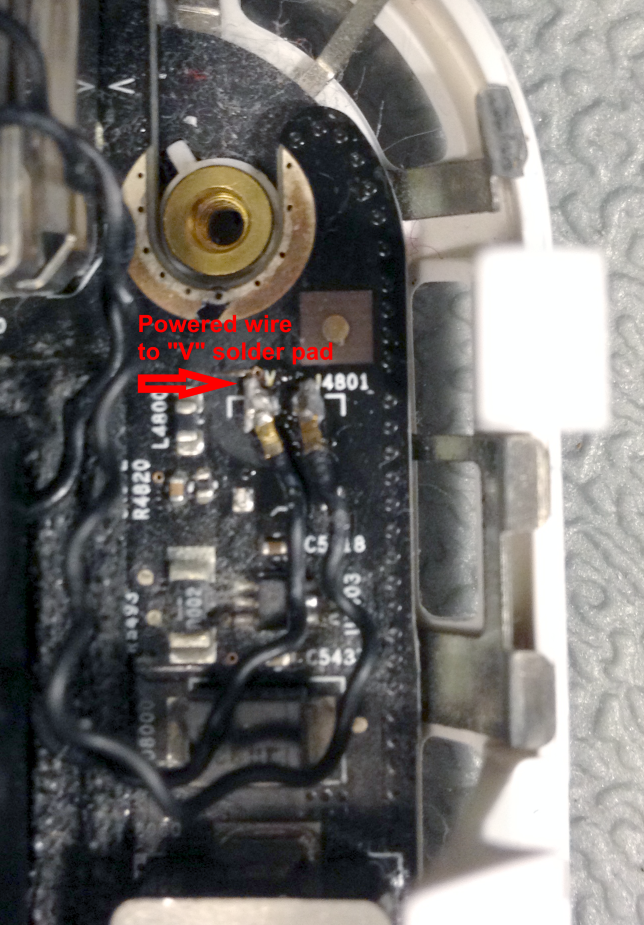 Before you put the Mini back together, test your work. Plug in the power supply and hit the power button. Even with nothing else connected to the board, it will still do the Mac equivalent of a POST. You should see the power LED come on, and the fan will start up. If they do, congratulations — your Mini is patched up and ready to go back to work. If not, double-check your work. Check for solder bridges between the wires and solder pads and clear them. If there are no solder bridges, try reversing the wires. You should be able to heat the connections to remove them, and then re-heat them to solder them back in the opposite configuration.

Tuck the wires back in neatly so they won’t be pinched, and re-assemble the Mini.